This post continues the retelling of my recent time in Belize: performing archaeological field work and learning about jaguar conservation. Searching for ‘Belize’ in this site’s search bar will reveal the other posts in this series.

Friday, May 26, was our first day off (we only received one per week). I was given a choice as to how I wanted to spend it: stay in and rest or tour the La Milpa Archaeological Site with Humboldt State and Elon Universities. Guess which one I chose?

We headed to La Milpa soon after breakfast. It was a short drive, since the archaeological site and accompanying ecolodge are right next to Texas Camp. Upon exiting our truck in front of La Milpa’s entrance sign, we were greeted by Dr. Brandon Lewis. He is a professor at Santa Monica College, a long-time member of the PfBAP, and an experienced archaeologist. Dr. Lewis was currently excavating at La Milpa, and would be leading our tour.

We began our hike by ascending a small hill, and then gathered around a fallen stela. These stone monuments are widespread throughout Mayan lands, and often contained some sort of engraving. This stela was lying near a Mayan ball court, and I felt my heart rate increase when Dr. Lewis pointed it out. I had heard about the importance of the Mesoamerican ball game from popular media, and I was excited to be able to see a ball court in person.

The fallen stela that is just inside the La Milpa Archaeological Site.

Another fallen stela at La Milpa; this one crowned with brilliant foliage. 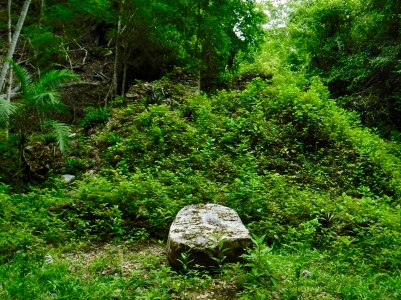 A zoomed-out shot of the leaf-crowned stela at La Mipa.

Dr. Lewis also told us that La Milpa is the largest Mayan site in the region. Looking around, I believed him.

We were standing in a vast space: surrounded by massive, overgrown Mayan temples. They were streaked with blue tarps, underneath which were filled-in archaeological digs. The jungle in this spot was fairly open and flat, and some of the nearby trees were quite impressive. We could also see a number of looters’ trenches.

Looting is a serious problem in Belize, which is why I do not share pictures of active archaeological operations. Instead of excavating carefully, looters hack into the most valuable portions of ancient structures as quickly as possible. This creates a series of unstable tunnels that are prone to collapse. In fact, as we resumed walking Dr. Lewis pointed to a looter’s trench that caved in during the 1980s; trapping and killing the looter inside. His remains are still there. 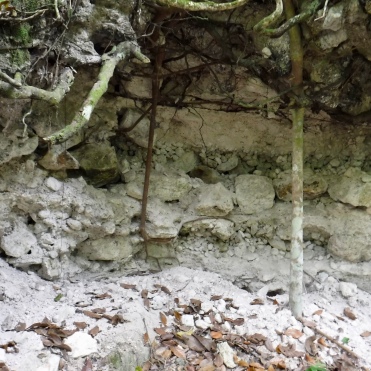 The inside of one of the many looter’s trenches at La Milpa.

The collapsed trench that still contains the remains of the looter who perished there.

Once we left the opening plaza, the path became more narrow and winding. We passed a large pit, whose historic purpose remains a mystery. We then climbed a steep but short ridge, and found ourselves at Dr. Lewis’ current excavation. It was a small area, with Belizean workers and American students going to an fro. There were archaeological units (holes) at either end of the relatively level space, and Dr. Lewis began to share with us what they had found.

Dr. Lewis explained that they had uncovered structures with drainage systems, plaster floors, benches, and even a small temple. He theorized that this site was a residential area for local elites, and that the built-up area we had passed through was the “downtown” of La Milpa. Whatever it was, I felt privileged to be there.

Dr. Lewis stayed behind to work when the tour was complete, with the Elon and Humboldt students showing ourselves out. We reached our truck before long, but we were not out of the woods yet. We still had to deal with Pierre the turkey.

Pierre is an ocellated turkey (Meleagris ocellata) who has decided that only he is allowed to use the La Milpa entrance road. He has a habit of jumping in front of trucks and blocking their passage, as if challenging them to a fight. Sure enough, he did this to us. Our driver had to reverse and try to go around Pierre several times, but eventually he succeeded. When I looked back Pierre was chasing us.

After that, the rest of the day was spent in peace. We enjoyed a delicious lunch at the Mennonite-run Traveler’s Restaurant, then visited the local general store (Linda Vista Shopping Center). I would have loved to be heading to the field tomorrow, but I had one more rest day ahead of me.