This post continues the retelling of my recent trip to Belize: participating in an archaeology field school and learning about jaguar conservation. It details the second half of a brief side-trip I took to the UNESCO World Heritage site of Tikal in Guatemala. Part 1 of this mini-series is located here.

The first part of this Tikal mini-series left off on top of Temple IV: the tallest pre-Colombian structure in the Americas. We sat there for a long time, enjoying the view and catching our breath. But there was more to see.

We descended the long staircase to the forest floor, and then made our way to the Lost World Complex. This group of 38 structures originally served astronomical purposes, allowing the ancient Maya to observe the movements of celestial bodies (Ecotourism & Adventure Specialists, 2015). At 32 meters (105 ft), the Great Pyramid is the tallest building in this complex.

The Great Pyramid at Tikal, which I was able to visit through my participation in the Programme for Belize Archaeological Project. 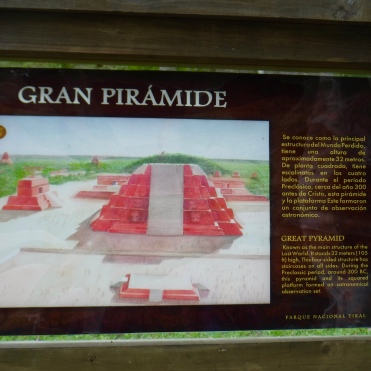 I followed the director of the Dos Hombres to Gran Cacao Archaeological Project (DH2GC) up one of the Lost World pyramids, where we came to a dark chamber. We passed through the doorway, and there we beheld a harrowing scene: vandalism. Dozens of prior tourists had scratched their names on a section of the plastered walls, as if they thought that ‘leaving their mark’ on this priceless structure would elevate their status. They were wrong.

Approaching the chamber atop one of the Lost World pyramids. 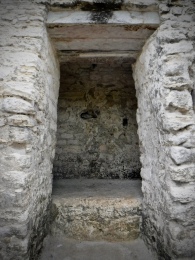 Almost inside the chamber. 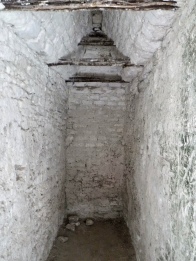 Beautiful plaster walls from inside the Lost World temple. You can faintly make out the banal graffiti on the right.

Fortunately, I did not remain grumpy for long. As I emerged from the chamber and began climbing down the pyramid, I glanced at a tree to my left. There, nearly at eye level, was a keel-billed toucan (Ramphastos sulfuratus). I stood there for several minutes, thrilled to have such a clear view of this magnificent bird – and in so special a place.

In fact, Tikal was full of life. Before long I came upon some leaf-cutter ants, hard at work as always. A few steps later a coatimundi (Nasua narica) climbed down a tree in front of us. It scurried along the ground for a few minutes, its long nose constantly sniffing the grass, before it ascended another tree. I was in heaven.

While us tourists were enjoying ourselves, this leaf-cutter ant was hard at work.

The coatimundi (Nasua narica) I saw at Tikal.

I am afraid that by now I was quite tired, and so cannot remember everything that happened. I know that we eventually came to Temple V, where a young couple was playing with their baby. It was a delight to see them so happy.

At some point we also linked up with a group of travelers from Israel. There were three of them, two women and one man, and they looked to be in their upper twenties. The man was boisterous, energetic, and exceptionally friendly. They were good company, but it was time for us to rejoin the rest of the Programme for Belize (PfB) group.

We left our newfound friends and located the forested path to Tikal’s marketplace. Shortly after we re-entered the jungle, a group of spider monkeys swung across the trail in front of us. Nearly a dozen tourists had gathered to watch them, and I was shocked at how well-behaved these monkeys were (see this post for an account of spider monkeys in less pleasant moods).

We linked up with the rest of our group at a marketplace that contained an assortment of gift shops and a restaurant. We meandered there for a while, before boarding our vans and returning to Flores.

Back in Flores, I ended the day by having dinner with a few of the students from Elon University. I once again had to be the translator, but I found it to be much easier than on the first day. Our waitress was patient and helpful, and the students’ exuberance was contagious. As we chatted in the cool, night air, I was happy.

So ended the archaeological potion of my journey. Tomorrow, June 17, 2017, was the day I had to break off from the main group. The real adventure was about to begin.