This post continues the retelling of my 2017 trip to Belize: participating in an archaeology field school and learning about jaguar conservation. The rest of this series can be found in the ‘Travel‘ category of this blog.

This post picks up where the previous entry for June 19, 2017 left off: at the entrance to the Belize Zoo.

I had come to “the best little zoo in the world” to meet with their Education Director, Jamal. Everyone I had spoken to about my interest in jaguars said that I had to visit the Belize Zoo, and I was hoping that Jamal could tell me more about the zoo’s work regarding jaguars – and help me identify fruitful avenues for my master’s thesis.

When I walked up to the zoo’s ticket window, it was staffed by a man named Edson. I told him why I was there, and then hit him with a series of questions. He patiently answered all my inquiries, and let Jamal know that I had arrived.

Jamal came out after a short wait, and explained that the zoo was short-staffed today. He asked if we could reschedule for tomorrow morning, to which I agreed. This gave me plenty of time to explore the zoo.

The weather that day was intermittently cloudy, with an occasional light rain. I began touring the zoo exhibits, which were organized along several paved paths: all lined with native vegetation. After being so purpose-driven for the past three weeks, it felt good to be able to wander aimlessly.

I saw a host of Belizean animals, many of whom I had never encountered before. There were tapirs, jaguarundis, American and Morelet’s crocodiles, margays, ocelots, grey foxes, pumas, spider monkeys, massive harpy eagles, and more. Of course, the Belize Zoo is mostly known for its jaguars. 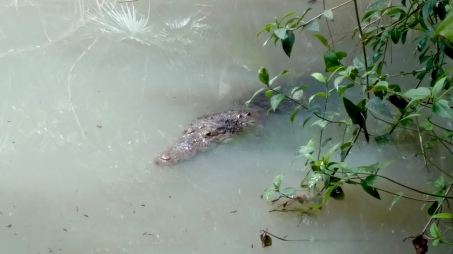 An American crocodile (Crocodylus acutus) at the Belize Zoo. 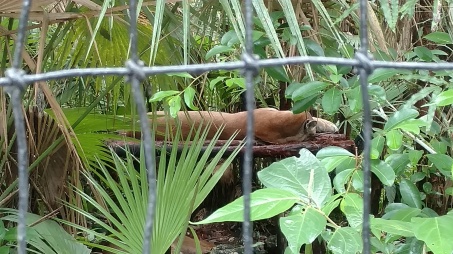 A sleeping puma (Puma concolor) at the Belize Zoo. Unfortunately, I wasn’t able to get a shot of its face. 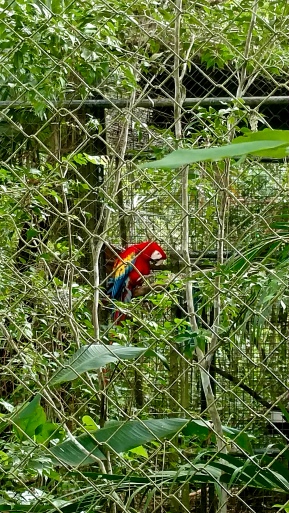 A scarlet macaw (Ara macao) at the Belize Zoo. 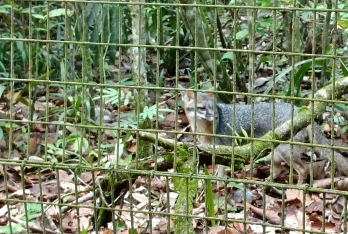 A grey fox (Urocyon cinereoargenteus) at the Belize Zoo. 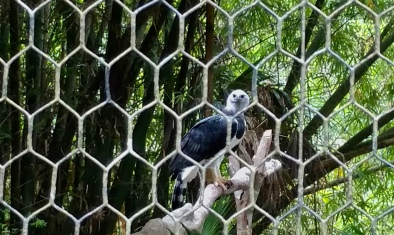 A harpy eagle (Harpia harpyja), one of the largest eagles in the world, at the Belize Zoo.

I eventually ambled into what I call the ‘jaguar wing’ of the zoo. This area contained several jaguar enclosures, along with a host of educational signs about the cats. But as I walked past the various cages, I could not find any jaguars. At one point I rounded a corner, and there – less than 3 meters (9 ft) in front of me – was a jaguar.

This individual’s name was Junior Buddy, and I was surprised by how big he was. I mean, I had known that jaguars were the third largest cat in the world. However, I expected them to appear short and stocky. Junior Buddy was considerably taller than I had anticipated. Most impressive of all was his muscular frame, which exuded power.

I had a few minutes alone with Junior Buddy, before a family of American tourists showed up. One of the daughters appeared to be in her 20s, and she asked me several questions about jaguars. She apparently mistook me for a zoo employee, which took me aback slightly. Could she not realize that I was another traveler?

Perhaps not. Although we were both Americans visiting Belize, we were there for entirely different reasons. I had also been living in the country for nearly a month by then, and probably appeared less ‘touristy’ than I had initially. The young woman was friendly and polite, but our brief conversation revealed that we were worlds apart.

Once I had finished at the zoo, a man named Antonio took me to my accommodations at the Tropical Education Center/Zoo Lodge (TEC). I had reserved a room in their Pond House, which proved quite comfortable. It had a hot shower, my first in Belize, which I hardly used. I had grown so used to cold showers by then that the hot water felt uncomfortable on my skin.

I turned in for the night after a pleasant hike on one of the TEC’s many trails. Before I fell asleep, I received a message from from Mike the seminarian. It turned out that the place he was staying at was too far outside San Ignacio for my purposes. But all was not lost, as he sent me links to two highly-regarded hostels in the city.

Tomorrow I would finally get to talk jaguars.