This post continues the retelling of my 2017 trip to Belize: participating in an archaeology field school and learning about jaguar conservation. The previous entry in this series is located here.

June 30, 2017 was a remarkable day. In the morning, I called the Belize Forest Department to schedule a meeting with Mr. Edgar Correa. When that failed, I sent an email to his secretary. With little else to do, I decided to visit Guanacaste National Park.

Guanacaste National Park is a 50 acre pocket of jungle on the outskirts of Belmopan. I had passed it several times on my bus rides to and from San Ignacio, and had long been curious about it. I therefore made the two-mile walk from Raj’s house to the park.

When I arrived, an elderly gentleman named Uriah was working the front desk. He had a dry sense of humor and a sharp wit, and the two of us exchanged jokes about me disappearing. Reassured that Uriah thought I would never be seen again, I set off alone.

Hiking Guanacaste’s short trails was heaven. It did not take long to traverse them all, but it was a joy beyond words to be in the jungle again. My cares fell away as I practically floated through the forest. 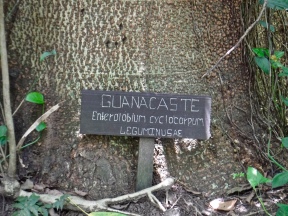 This is what the bark of a guanacaste tree looks like. 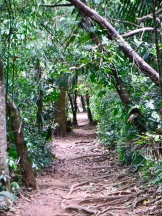 Looking down a trail at Guanacaste National Park. 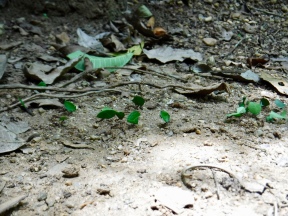 Leaf-cutter ants were everywhere in the jungle! 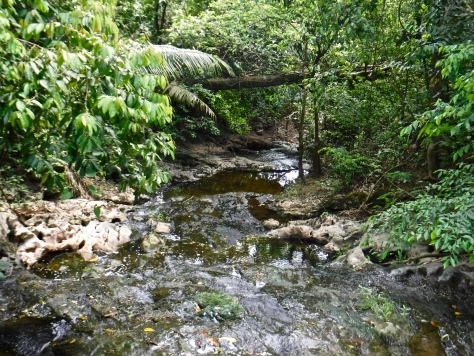 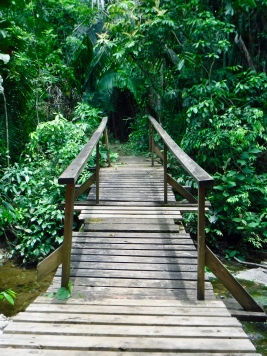 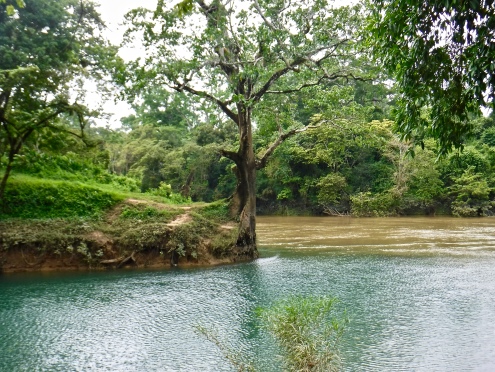 A tree at the edge of where the swimming hole at Guanacaste National Park meets the Belize River. 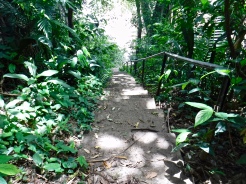 The stairway to the Belize River in Guanacaste National Park. 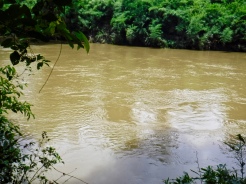 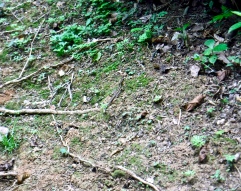 A well-camoflauged lizard. These little guys were lightening-fast, and almost impossible to get a picture of! 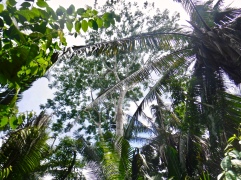 Looking up at a tall tree in Guanacaste National Park. I will never cease to be amazed by large trees. 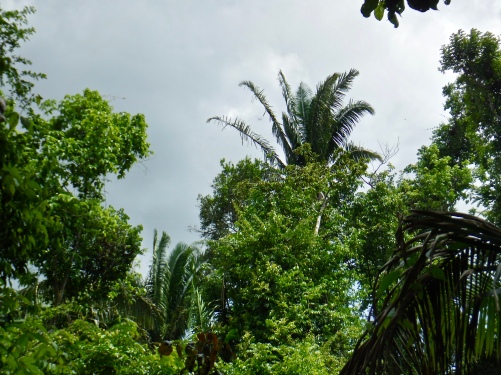 At one point I thought it was going to rain. Thankfully, it did not.

Upon returning to the visitor center, I chatted with Uriah for several minutes. Just as I was turning to leave, a man named Arvin arrived. He looked young, seemingly in his thirties, and I assumed he was another worker at Guanacaste. I was very wrong.

I told Arvin that I had initially come to Belize for an archaeology school, which piqued his interest. Arvin and many others had long suspected that there were undiscovered Mayan sites in Guanacaste, and perhaps a chultun (underground storage cave). He began to ask for my advice on several matters, but I objected that I was not a true archaeologist. My main interest lay with jaguars.

At this point Arvin revealed that he oversaw the Cockscomb Basin Wildlife Sanctuary: the world-famous jaguar preserve. In fact, he was second-in-command at the Belize Audubon Society.

I tried to appear calm as I spoke to Arvin about Cockscomb. I asked him how people living near the preserve felt about jaguars, and if anyone had ever studied their attitudes towards the cats. Arvin replied that he felt local people’s attitudes towards jaguars were largely negative, but that no one had technically studied them. We both agreed that this might make a good master’s thesis.

Arvin invited me to continue our conversation at a restaurant in Belmopan. Once there, Arvin inquired in more depth about why I was interested in going to Cockscomb.

I explained that I wanted to focus my master’s thesis on the human dimensions of jaguar conservation. I had come to Belize through the Programme for Belize Archaeological Project, and was now looking for jaguar-related research opportunities. Arvin thought for a moment, then said that he would waive the entrance fee to Cockscomb for me if I was going to write a formal report.

It was a tempting offer, but I felt that Arvin misunderstood my intentions. I clarified that I was hoping to conduct my research next summer. The reason I wanted to visit Cockscomb this summer was to begin learning about local needs. I would then design a thesis to help address those needs. Arvin subsequently retracted his offer.

Still, it was a remarkable encounter. I left feeling more determined than ever to visit Cockscomb, and headed to Everest Indian Restaurant to tell Raj what had happened. It was now June 30, and I was flying out of Belize on the morning of July 4. This gave me just enough time to swing by Cockscomb.

But once I was within Everest’s wifi range, I noticed I had an email from the Forest Department – Mr. Correa would be happy to meet with me on the morning of July 3.

Suddenly, it did not seem worth it to visit Cockscomb. I would spend much of tomorrow getting there, could stay for maybe a few hours, and then would have to return immediately to Belmopan. I thus decided to remain with Raj for the rest of my time in Belize.

As much as I would have liked to visit Cockscomb, this turned out to be the right decision.

Published by Josh Gross | The Jaguar