This is the first of several posts detailing my recent field trip to the Mattole watershed. Note: some of the names of the persons featured in this series have been changed to respect their privacy.

It is now almost one month since my trip to the Mattole watershed, and it is high time I wrote about it. It is also an experience I would like to relive, although it did not start out that way.

While sitting in the parking lot of Humboldt State University’s forestry building, all I wanted to do was sleep. It was about 6:30 am, and the trees of the nearby Arcata community forest were cloaked in the same fog that enveloped my mind. My cohorts trickled in, and their pleasant conversations helped to counteract my grumpy mood.

Shortly after 7 the thirteen of us were comfortably seated in our two vans and on our way to the town of Petrolia. We passed by fog-drenched pastures, coastal mud-flats exposed during the low tide, and the oft maligned city of Eureka. I had frequently been warned about that city, and I am afraid that those conversations had biased me against it. Therefore I was relieved when we reached a stretch of road known as the Wildcat.

The Wildcat lived up to its name. The first stretch of the road was surrounded by lush greenery on both sides, and it aggressively wound back and forth as it gained height. After some time we left the dense vegetation behind and entered semi-open ranch land, and were immediately rewarded with stunning views. A glance to our right allowed my cohorts and I to gaze upon the fog-covered lands below.

The road continued to wind; though now an up-and-down element was added to it, and for a brief spell visibility was greatly reduced by thick fog. But for most of the time our eyes were free to take in the rugged scenery – and I thoroughly enjoyed speculating about what sorts of creatures I might encounter there. We did pass by a pair of zebras, after all!

Eventually my imaginings had to be put on hold, because we reached the Mattole Restoration Council’s office in Petrolia. The rural town had a sleepy feel to it: no doubt enhanced by the unwelcome chill that struck me as I left the van. Thankfully we were back in our warm vehicles after a short conversation with Flora, the multi-talented woman who had organized much of our week. We were now on our way to the headquarters of the Mattole Salmon Group.

The Mattole Salmon Group (MSG) is an incredible NGO that has helped to galvanize community-led conservation efforts to save the Mattole River’s imperiled salmon. You can read about their beginnings in the book Totem Salmon, so I will not delve into their history here. But while we were outside their main office, my cohorts and I gathered into a circle and had a wonderful discussion about the intricacies of local non-profit work. My classmates asked many good questions, but I was largely distracted by the area’s red squirrels (Tamiasciurus hudsonicus). They were a delight to watch, and if it would not have been rude I might have left the circle to take pictures of them!¹

Before long we left the squirrels behind, as we had an agenda to follow. Nathan, a hydrologist working with the MSG, led us through a narrow riparian woodland hugging the banks of the Mattole. Upon reaching a patch of sand alongside the river, he began to tell us about the habitat restoration work the MSG has been doing. They have been inserting trees and wooden structures into the river, since overenthusiastic restorationists had removed too much of the debris that young salmon (fry) rely on. They had also carved out a pool off the side of the main river where the fry can take refuge. It was delightful to stand on the banks of the Mattole, but once again we had places to be. 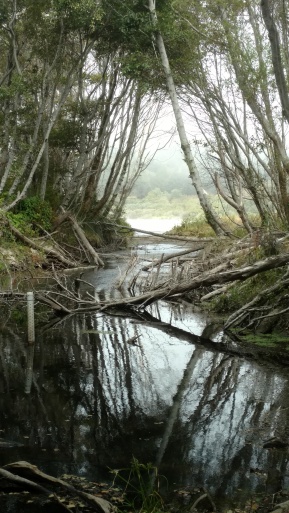 A pool off the side of the Mattole River designed to give fry a place of refuge.

If you look closely, the distorted image of a tiny fish is visible near the center of this photo.

Upon returning to the building which houses the Mattole Restoration Council, my cohorts and I took a much-needed break for an outdoor lunch. Shortly thereafter we were joined by Dulce of the Mattole Valley Family Resource Center. She explained to us some of the challenges facing her community: lack of funding for social services, transportation difficulties, soaring land prices as a result of a boom in the marijuana industry, and more.

Several more local residents joined us at 1 pm, and they delved into greater detail about the obstacles they have to overcome. The recent explosion in marijuana cultivation came up again, as did factors associated with Petrolia’s remoteness. For example, it takes law enforcement nearly an hour to reach the town.² The region’s history as ground zero for the domestic war on drugs might also make people wary of the police.

Despite the prevalence of negative topics during our discussion, the forum was a joy to be apart of. My cohorts kept asking insightful questions, and the community members fed off each other’s energy. Based on the passion and commitment displayed by those individuals, I left feeling optimistic about Petrolia’s future. The cows mooed in agreement.