This is the third post detailing my recent introduction to qualitative field work in the Mattole watershed. Parts one and two will bring you up to speed.

When I awoke on the morning of August 16, most of the human inhabitants of the A Way were still in their tents. So I just laid there: listening to the enthusiastic calls of Steller’s jays (Cyanocitta stelleri), and trying to guess their antics by their noise. It was a pleasant way to experience the newly awakening world, but soon enough my cohorts began to rise. So I joined them.

Breakfast was a delightful affair, despite the morning grogginess. The spirit in camp was affable; with food and utensils being shared freely. This allowed me to borrow a stove and make one of the best cups of Turkish coffee I have ever had. In fact all of the coffee I made at the A Way was spectacular. At first each sip had a sweet flavor; before developing a slightly sour aftertaste: like an exquisite dark chocolate. Try as I might, I have not been able to replicate that quality at home.

Of course the point of this trip was not to drink Turkish coffee all day (although I would have liked to). So by 8:30 am my cohorts and I were on our way to meet up with rancher Michael Evenson.

Upon meeting Michael near the banks of the Mattole River, my first impressions of him were favorable. He was a tall man, looking to be in his mid 40’s, with an aura of quiet confidence. Having spent the majority of my life in highly urbanized areas in the eastern United States, I initially felt self-conscious. In particular, I was nervous about unintentionally violating social norms. But Michael’s calm, welcoming demeanor quickly put me at ease.

As we toured Michael’s ranch, I was impressed by how much he knew about his land. He spoke of the differences between native and European grasses, the importance of fire, how the trampling hooves of cattle might actually aid the germination of some plants, and more. Michael seemed especially keen to show us a rock ford he had put in, which is an innovative way of dealing with the large amounts of runoff that accumulate during the rainy winters.

Metal culverts frequently get washed out and do a poor job of reducing the amount of sediments that flow downhill, which contributed to the decline of salmon populations in the region (House, 1999). Rock fords, by comparison, use natural materials (such as stones) to slow the velocity of running water. This helps to reduce the amount of eroded material that gets deposited into rivers and streams, and they are much harder to wash out than culverts.

In addition, my notes from our time with Michael frequently center around the theme of adaptability. He spoke of the need to change with the times in regards to climate change, the importance of adapting with the resources one has, and how adaptability is the key to sustainability. It should come as no surprise then, that Michael espoused local land management strategies. Such approaches might be more amenable to changing conditions, since they will theoretically be less hampered by centralized bureaucracies.

Note: the previous sentence is my own supposition. According to my notes Michael did not make this claim, and I have no hard evidence to back it up.

But true to form, I spent a great deal of time being distracted by the natural world. The hilly, sun-drenched terrain of Michael’s ranch was a joy to explore. It contained a mixture of woodlands and open rangeland, and the varied topography provided excellent views. 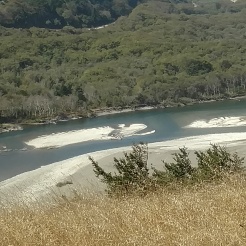 Looking down on the Mattole River from an elevated point on Michael’s ranch. 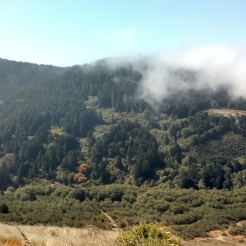 Gazing out at the mountains that lie across the river from Michael’s land. 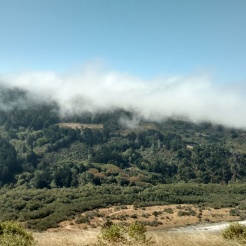 Another view from Michael Evenson’s property.

Following our tour of Michael’s land, my cohorts and I made our way to the banks of the Mattole. There we took our lunch, which gave me a chance to simply admire the river. We had spent a great deal of time talking about the importance of being attached to a place, but until then I had not felt it. Sitting there, listening to the gentle sounds of the softly flowing water, gave me my first chance to truly feel in touch with my new environment.

Naturally this could not go on forever. After our brief lunch my cohorts and I were back on the road, heading to our next encounter. We were about to experience a remarkable forest, which I will write about in Part Four of this series. I will have it up as soon as I can!

In an effort to make this post more interactive, I have a brief question for you. Have you ever had an experience where you felt truly at one with your surroundings? If so, please share a few details about it in the comments section below. I would love to read about it!