This post is the continuation of my account of a course I took last semester. It involved a week of camping in the Mattole watershed of northern California, during which my cohorts and I were introduced to social science field work. Entering “Mattole” in the search bar to the right will help you get caught up.

The morning of August 18 began like the previous three. My cohorts and I clambered out of our tents into the cool air, and made a quick breakfast. We then loaded into our vans and headed for Bob Stansberry’s ranch.

Upon arriving at Bob’s property, we drove down a long, wooded driveway. We found Bob seated atop some sort of heavy machinery (the name escapes me), processing trees he had harvested. We then talked about market conditions surrounding timber in California. Current regulations are burdensome for small-scale producers, and make it cheaper to buy from out of state. In fact, my notes indicate that up to 70% of California’s wood comes from other states. This makes it difficult for mills to stay open, and those that do have little competition; they thus exercise considerable power over timber producers. This discussion reminded me that it is important to consider how environmental legislation might affect people who rely on the land.

Following our talk about timber, we left the woods and entered a sun-drenched field. The views were spectacular. Golden meadows and green forests mixed together in the mountain-scape before us: a result of forest succession (fir trees expanding into areas that were historically open). The paths created by the cows were also clearly visible, making the surrounding hillsides appear striped.

The view from the ridge where Bob told us about his family’s history. 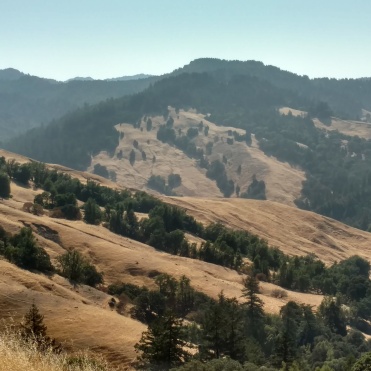 My graduate program’s orientation class in the Mattole Valley allowed me to take my first stabs at travel blogging.

As we gazed upon the countryside, Bob told us about his family’s history. His ancestors moved from West Virginia to the Mattole Valley in the 1850s, and were part of the militia that helped slaughter the region’s Native inhabitants. Bob was clear about the fact that this history is, “Not a pretty story,” and that he is not proud of the role his family played in it.

I was impressed by how open Bob was about the Native American genocide in the Mattole, because in my experience this is an element of United States history that is rarely discussed. It also has environmental consequences. For example, the meadows before us were actually created by indigenous peoples. Activities like controlled burning opened up sections of forest, and in the absence of such processes the trees are expanding. Many of the people we spoke with in the Mattole discussed this genocide and its effects, which I found to be encouraging. One cannot improve the future by ignoring the past.

But we were here to learn about how Bob makes a living. So we travelled along the ridge to Bob’s house, where we were greeted by several enthusiastic dogs. We spent a few moments inside Bob’s comfortable home, before heading into his orchard. It contained many varieties of fruit: apples, pears, plums, grapes, prunes, and more. Bob was the epitome of hospitality, and allowed us to freely sample the delectable treats. He also showed me a large pile of bear scat, which I naturally had to photograph. I was perfectly content in that orchard, but there was more to see.

After reclining under some fruit trees for lunch, we moved to Bob’s Christmas tree farm. The distant green hills were clearly visible from this portion of Bob’s ranch, as a flock of crows passed before us. Bob talked at length about the trees he had growing there, although at this point our group became slightly disjointed. Fortunately we did not stay separated for long, and eventually reunited for one final demonstration.

My cohorts and I followed Bob to a large log, which we all used as a couch. He then showed us how he turns unfinished wood into fence posts with a simple hand tool, which seemed to require a good deal of effort. One of my more outgoing cohorts decided to give it a try. He struggled at first, but after a few pointers from Bob his form improved greatly. All of us were having a fantastic time, and it was hard to leave! Bob had been a gracious host, and I felt incredibly free on his ranch. However, this was not a vacation. My cohorts and I had been collecting many notes throughout the week, and now it was time to use them.

In Part 8 of the Mattole series, I will detail my introduction to one of the most basic and important parts of the research process. For now, I leave you with a series of shots of the mountains behind Bob’s land.

A view of the mountains behind Bob’s property.

The mountains again, but closer. 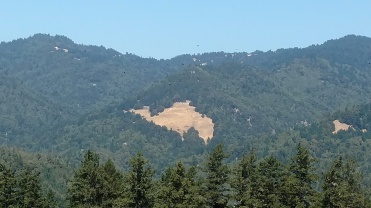 Closest. A flock of crows appears as black specks in this zoomed-in photo.