This post continues the retelling of my 2017 trip to Belize: participating in an archaeology field school and learning about jaguar conservation.

As I wrote in the last post in this series, June 26 was my most surprising day in Belize.

My main goal for that day was to arrange a time to speak with a man named Omar Figueroa. His name had come up during my conversations with Jamal and Dr. Harmsen, both of whom claimed that Dr. Figueroa was a true ally for jaguars. As I understood it, Dr. Figueroa was the head of Belize’s Forest Department. I thus intended to head to the Forest Department’s headquarters and ask about scheduling a meeting.

However, when I woke up on the 26th I felt a strong urge to visit my friend Raj at Everest Indian Restaurant. This ran counter to my plans, since I was hemorraging money and did not want to eat out. But Everest was on the way to the Forest Department, so I stopped there anyway.

When I arrived at his restaurant, Raj gave me a completely unexpected bit of news: he had readied his spare room for me. When I first visited Everest on June 21, I had been told that Raj owned a large house. Unfortunately, at the time Raj had said that he was not able to host anyone. During the intervening five days, Raj had apparently been hard at work preparing his house for me.

I was not about to refuse Raj’s offer. I called Karen, the owner of Belmopan Tiny Houses, and explained what had happened. She was remarkably accommodating, and we agreed that I would be out of my tiny house by 4pm tomorrow. 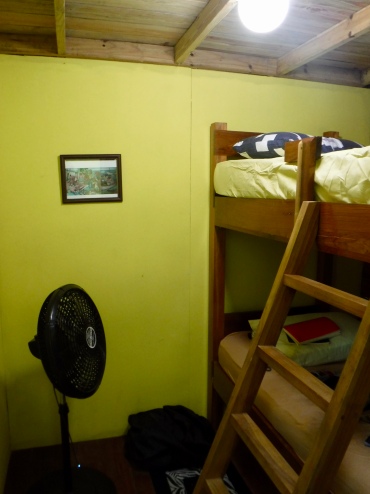 I was not thrilled about leaving my cozy tiny house, but I knew it was for the best. Shown here is my bedroom.

The dining room of my tiny house, which I was not thrilled about leaving.

After my conversation with Raj, I rode to the Forest Department on a bicycle I had borrowed from Karen. I spoke to the front desk worker, who told me that Dr. Figueroa now worked for the Department of Environment (DOE). I got back on my bike, pedaled past the Belmopan bus station, and entered the building that housed the DOE.

Upon entering the building, I was greeted by a lone security guard who was sitting behind a plexiglass window. I told her that I wanted to speak to a Dr. Omar Figueroa about jaguars. She stared at me disbelievingly and asked, “You mean the Minister? I turned around, and there was a portrait of the Honorable Dr. Omar Figueroa hanging on the wall. He was now Belize’s Minister of the State within the Ministry of Agriculture, Forestry, Fisheries, the Environment, Sustainable Development, and Immigration. Oops.

Remarkably, the security guard allowed me to enter the interior of the building and speak to Hon. Dr. Figueroa’s aides. I explained to them that I was hoping to do graduate research in Belize next summer, and that talking with the Minister would be the perfect way for me to learn about jaguar conservation in Belize.

While the aides were receptive, they told me that Hon. Dr. Figueroa was leaving the country tomorrow for nearly a month. Furthermore, he was too busy today to meet with me. As consolation, they gave me the Minster’s email address and encouraged me to write to him. I was amazed I even got that far.

Following my stop at the DOE, I began riding back to Belmopan Tiny Houses. At one point I attempted to turn from a foot path onto a city street. To do so, I had to steer my bike across a footbridge that spanned a four-foot deep ditch.

I cannot remember why, but as I started going over the bridge I jerked the handle to the right – sending the bike off the bridge. Time seemed to slow down, and I saw that my chest was headed for a large, pointed rock. I feared that if my chest hit that rock, I would at least bruise a rib. I threw my hands out, landed in the pushup position, and only barely scraped the rock.

In fact, I came away from the crash with only minor injuries: a mildly bloody right wrist, a sore left knee, and a red mark from where my chest grazed the rock.

On my way back to the tiny house, I stopped at Ice Point to collect my thoughts. I needed to figure out how to get a master’s thesis out of this trip. As I flipped through my notes, nothing jumped out at me. I had a great time at the Belize Zoo, and wondered if I might be able to work with them somehow. But at that moment, as my wrist and knee throbbed, I could not come up with any definitive ideas.

I hoped that Yahaira, who I would speak with tomorrow, could alert me to possible leads.